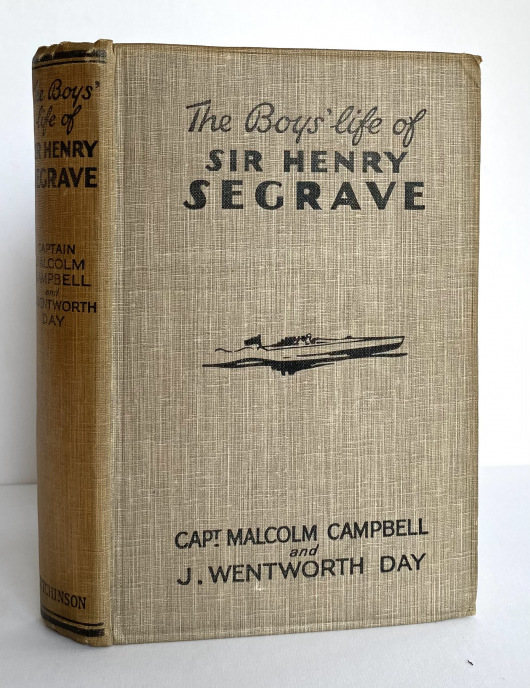 The Boys Life of Sir Henry Seagrave - SIGNED by both Authors

London: Hutchinson & Co.
First edition
[1930]
Very Good+
B5110
First edition. Small octavo, pp 284. Bound in tan brown cloth covered hard boards with black lettering and decoration to upper board. With 32 photographic illustrations. Signed by Malcolm Campbell to the ffep and further signed and inscribed by his co-author to the front paste-down: “To Stephen Campbell (“the Baby Seagrave”) from J. Wentworth Day | 21 Oct ‘30”. A very early inscription to an unidentified Campbell .  This book has the same content as ‘The Life of Sir Henry Seagrave’ but was published by Hutchinson under a variant title to attract the juvenile reader. Biography of the great land and water speed record holder who first broke the land speed record in 1926 at 152 mph and raised it several times finally to 231mph at Daytona Beach in 1929. He died attempting the water speed record on Lake Windermere in 1930. Seagrave was a great competitor of Campbell , so it is fitting that Campbell should have co-authored this book which is undated but was published shortly after Seagrave’s death.


Attractive copy in Very Good Plus condition.
Ask a Question
425