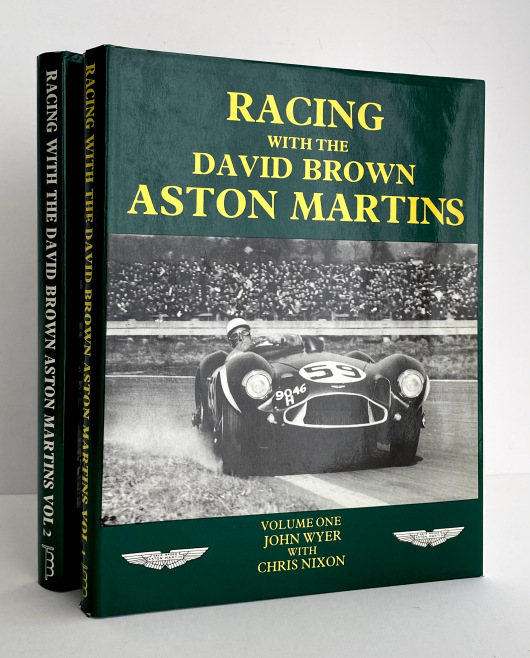 Isleworth: Transport Bookman Ltd
First edition
1980
Fine / Fine
B5037
Two Volumes, both First Editions. Octavos, pp XIII, 249; X, 249. Bound in green cloth covered hard boards and in the original dust jackets. Volume One has been SIGNED to the title page by both Wyer and Nixon and additionally signed by Roy Salvadori, Aston Works Driver from 1953 to 1960 who drove Aston Martin’s first Le Mans winner in 1959. Volume One was written jointly by Nixon and Wyer, who was Aston Martin Racing Team Manager from 1950 to 1957 before moving onto a development role for the hugely successful DB4. Volume Two was compiled by Nixon and comprises recollections of Aston Martin Racing with contributions from a wide range on key participants including David Brown, drivers including Eric Thompson, Roy Salvatori, Carroll Shelby and Stirling Moss and team engineers and mechanics. This is widely considered to be the best and most comprehensive book on Aston Martin Racing, and this example is enhanced with the three signatures to Volume One.


Just about Fine condition books in Fine jackets. A lovely set and a cornerstone of any Aston collection.
Ask a Question
650