home / EXHIBITIONS / 2015 / Revolutionary Fervour - An Exhibition of Vintage Original Chinese Propaganda Posters / Capture the Reactionary Revisionists and Expose them to the Public!

Capture the Reactionary Revisionists and Expose them to the Public! 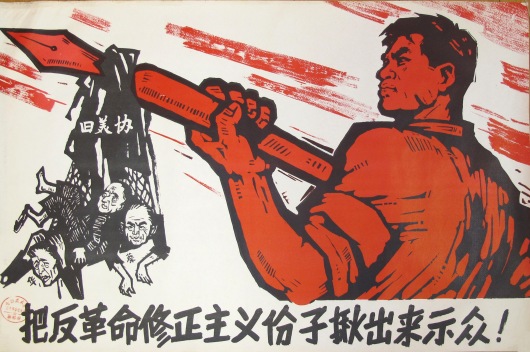 Capture the Reactionary Revisionists and Expose them to the Public! (circa 1967)

The poster criticizes Cai Ruohong, the Vice president of China's Artist Association and Wua Junwu, the Secretery-general, as the head of the counter-revolutionaries among Chinese artists. Cai was accused of opposing the cultural and art direction of Mao, boycotting the production of new art style  and defending the power of the capitalists. Hua was accused of being a right-wing capitalist cartoon artist and against Mao's Thoughts.