BRUCE, The Hon. Mrs Victor A. 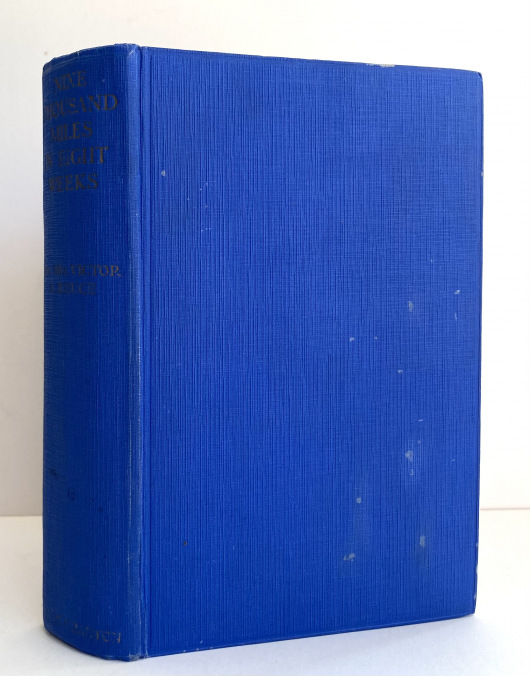 Nine Thousand Miles in Eight Weeks, Being an Account of an Epic Journey by Motor-Car through Eleven Countries and Two Continents (1927)

BRUCE, The Hon. Mrs Victor A.

London: Heath Cranton Limited
First edition
First edition. Octavo, pp 254. Bound in blue cloth covered hard boards with gilt lettering to the spine. Illustrated with numerous photographic plates. End paper maps showing the route from John O’Groats in the North of Scotland to Dover and on through France , Italy , Tunisia , Algeria , Morocco , Spain , Portugal and back through France to the UK . The spine and front cover of the dust jacket has been pasted to the verso of the ffep and the text from the rear of the jacket pasted to the half title page. Further a printed Christmas greeting has been pasted to the verso of the frontispiece from Mr & Mrs Howard Marryat (their identity remains unknown). An amazing trip and story written by a very adventurous racing driver. Mildred Mary Petre, also known as Mrs Victor Bruce, began this journey competing in the 1927 Monte Carlo Rally, in which she came sixth overall and won the Coupe des Dames. She then continued on through Europe and North Africa covering 9,000 miles in eight weeks. Aside from cars, Bruce held endurance records in power boats and furthermore in 1931 flew solo around the world becoming the first person to fly from England to Japan and the first woman to fly solo around the world.


A few small marks to the boards but overall the book is in Very Good Plus condition, and the items pasted in have been noted above.
Ask a Question
90